PROGRAM - RADICAL POLISH ANSAMBL: TRADITION NIGHT / ONCE ON THE FOLKS

RADICAL POLISH ANSAMBL: TRADITION NIGHT / ONCE ON THE FOLKS

RPA – ONCE ON THE FOLKS / premiere

RADICAL POLISH ANSAMBL – ONCE ON THE FOLKS

Radical Polish Ansambl is a group that engages in a creative dialogue between tradition and modernity. The musicians are well known to the audience of the CODES Festival. This time, the Ansambl will present a non-obvious version of themselves. “Raz na ludowo” [Once on the folks] is this year’s festival club and, at the same time, an event in which invited musicians take up the challenge which is different from the usual – they will play traditional mazurkas and polkas in an in crudo form. Members of the group are experienced explorers of folk music culture, and students of rural musicians, so they will for sure perfectly adapt to this new formula. This year’s Dance Night will comprise of the so-called suits, i.e. favourite music sets from masters from the area of Rawa, Łęczyca, Radom, Rzeszów, and the Lublin region. Raz na ludowo (English: one time in a folk style) is a slogan internally uses as a synonym, kitsch, shallow, superficial approach to folk culture. It is a kind of a “screw to one’s mug” which for generations has been put to instrumentally treated folklore. The Radical Polish Ansambl will face such a stereotypical view by playing mazurkas and polkas in a natural way, to dance. Will the musicians manage to take the spell off this stereotypical thinking? Will the band touch something deeper in the simple, repetitive forms of our oldest mazurkas? Let’s find out together during the Festival’s Tradition Night.

Radical Polish Ansambl attempts to bring together traditional and avant-garde music and it offers a real alternative to the stereotypical ideas regarding the relationship between folklore and classical music which are entangled in different “peasant-manias” and idealizations of the folk culture. RPA performs canonical pieces of contemporary music and works composed specifically for them. This allows them to explore completely new formulas for group performance and forming relationships with the audience. As far as contemporary music is concerned, RPA offers the often sought-after “new performance” based on the primeval sense of rhythm, sound and tonal sensitivity, and oral tradition, which may seem paradoxical. Formed in 2017, RPA has been led by Maciej Filipczuk and curated by Michał Mendyk. The members of the ensemble include six violinists: Izabela Kozak, Łucja Siedlik, Maria Stępień, Mateusz Kowalski, Marcin Lorenc, the leader Maciej Filipczuk and percussionist Piotr Gwadera, all of whom use traditional techniques borrowed directly from traditional folk masters. The band also performs with guests – instrumentalists and singers who also represent traditional performing techniques, rather than use musical notation. 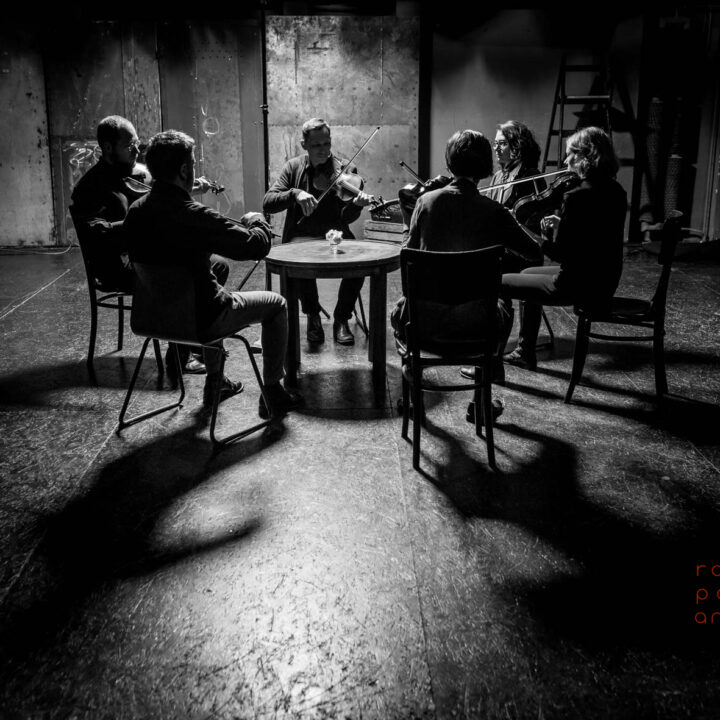