PROGRAM - ON THE REVOLUTIONS

Co-financed by the Minister of Culture and National Heritage from funds of the Culture Promotion Fund as part of the “Composer’s commissions” program, implemented by the Institute of Music and Dance.

Co-financed by the National Center for Culture.

An extraordinary collection of brand new sounds and narrations in the latest works by Jagoda Szmytka and Wojciech Blecharz commissioned and presented by proMODERN ensemble. The event will remind the legendary piece Ecloga VIII by Krzysztof Penderecki in a new version of the cast and bring out of the darkness of the little knowledge about the existence of such a wonderful miniature by Witold Lutosławski Lord Tennyson Song. During the concert we will be able to listen to Interludes by Rafał Ryterski – this music fascinates and expands the sound field and cultural associations – the pieces commissioned by proMODERN. And the premieres: an improvised performance by Jerzy Kornowicz for the musicians of the Iuventus Orchestra. Finally – “main course” – the premiere of Zygmunt Krauze’s Copernicus – Our Planet. Reference to individual and collective consciousness and rationality – by quotations from Nicolaus Copernicus and words taken from the texts of the Paris Agreement. Music and thought in the face of the global threats to the climate and – by implication – other destructive human actions. Another important voice of the composer in common matters.

proMODERN specializes in interpreting works of contemporary music. They have presented the world premieres of 38 pieces, mainly by Polish composers. The group was founded in 2012. Since then they have performed at many Polish and international festivals, at all of Poland’s philharmonic halls.

proMODERN has won five Polish music industry Fryderyk Awards: in 2015 for their debut album Where Are You? Pieces from Warsaw, and in 2018 for their second album, “proMODERN shakespired”, which was released in December 2017. In 2020 they won Fryderyk Award in the “Contemporary Music Album of the Year”  for their new album “Comfort zone”.

In 2018 proMODERN was nominated for a Coryphée of Polish Music Award in the “Discovery of the Year” category for their interpretation of K. Stockhausen’s Stimmung at CODES Festival in Lublin.

The Polish Sinfonia Iuventus Orchestra was founded on the initiative of Jerzy Semkow, one of the most prominent Polish conductors. Established by the Minister of Culture and National Heritage with a decree of 1 October 2007, it is a state artistic institution, the guiding principle of which is to give young musicians an opportunity for an artistic orchestral debut and prepare them to work in similar professional ensembles. The Orchestra is composed of the most talented graduates and students of art music academies under 30 years of age.

Sinfonia Iuventus began its artistic activity in June 2008. It has worked with many renowned conductors, including Krzysztof Penderecki, Gabriel Chmura, Antoni Wit, John Axelrod, Charles Dutoit, Nicolae Moldoveanu, Juozas Domarkas, Michaił Jurowski, Tadeusz Kozłowski. In 2018, the Orchestra celebrated its tenth anniversary of artistic activity, and during a concert at the National Philharmonic in Warsaw on October 8th, it officially adopted the name of Jerzy Semkow.

Deputy Director of the Jerzy Semkow Polish Sinfonia Iuventus Orchestra He has been associated with this institution since October 2017, initially as the assistant conductor and then as the orchestra manager.

In 2017 he was honoured with the Medal of the Association of Polish Music Artists for “contribution to Polish music”.

Composer and pianist. He divides his work into four categories: the first is unistic (unitary) music inspired by the paintings of Władysław Strzemiński; the second – spatial compositions performed in specially constructed interiors; the third – “music about music”, characterized by the presence of allusions and quotes; the fourth is subjective, deeply expressive “music of returning to the roots”.

He is the author of 7 operas and over 100 orchestral, chamber and solo compositions. As a concert pianist, he performs on the most important stages in Europe, the Americas and Asia. He gives master classes and lectures at universities in Japan, South Korea, China, USA and many European countries.

He was awarded, among others, the French National Order of the Legion of Honor (2007) and the title Chevalier dans l’Ordre des Arts et des Lettres (1984), and in Poland the Knight’s Cross – The Order of Polonia Restituta (2014) and the Gold Medal for Merit to Culture – Gloria Artis (2010). He is an honorary member of the Polish Composers’ Union, the Witold Lutosławski Society, Polish and International Society for Contemporary Music.

composer, piano improviser, music animator, born in 1959 in Lublin. He studied composition with Tadeusz Baird and Marian Borkowski at the Music Academy in Warsaw, and with Louis Andriessen at the Royal Conservatory in The Hague.

He has written commissioned works for festivals, institutions and performers in Poland and abroad, such as BBC Radio, Polish Radio, the Experimental Studio of  Polish Radio, the BBC Singers Choir, the Warsaw Autumn Festival, the De Ereprijs Orchestra, the Joachim quartet, the Prague Philharmonic and the City of Wrocław.

Recordings of his works have been released on such labels as BBC Music, Signum Classic, Polskie Nagrania, Acte Préalable, CICI CROSSROADS and Polish Music Information Centre.

In 2000 his “Figury w oplocie” received a commendation from UNESCO’s International Rostrum of Composers, while in 2008 his composition “Spiętrzenia” was included in the group of seven nominations for the first edition of Opus Music Prize of the Public Media.

Kornowicz also composes works for children, music for the theatre and film, as well as songs. In 2001 he initiated the formation of Mud Cavaliers, an intuitive music group which brings together improvising composers and authors of alternative and jazz music. He has performed with this group at many festivals. In 2011 Mud Cavaliers performed in many capital cities of Europe with the programme Metropolis and myth within the framework of the Polish Presidency of the Council of the European Union. Jerzy Kornowicz also makes appearances as a solo improviser.

He co-organised the second and third Encounters of Young Composers Droga, co-initiated the Akordy in Lublin, and the Generacje series of concerts for Polish Radio. He was the artistic curator of the Audio Art and Sound Spaces Festival at the Centre for Contemporary Art at Zamek Ujazdowski in Warsaw, and author of the project “The Academy of Sound” – a series of educational concerts featuring new music, presented at Warsaw schools. He is the artistic commissioner of the CODES Festival of Traditional and Avant-garde Music, and the author of the workshops “All-Poland Buy-up of New and Used Sounds”.

Since 1994 he has led the authorial programme of music education in the schools of the Association for Culture and Education in Warsaw. Since 2003 he has been President of the Polish Composers’ Union. 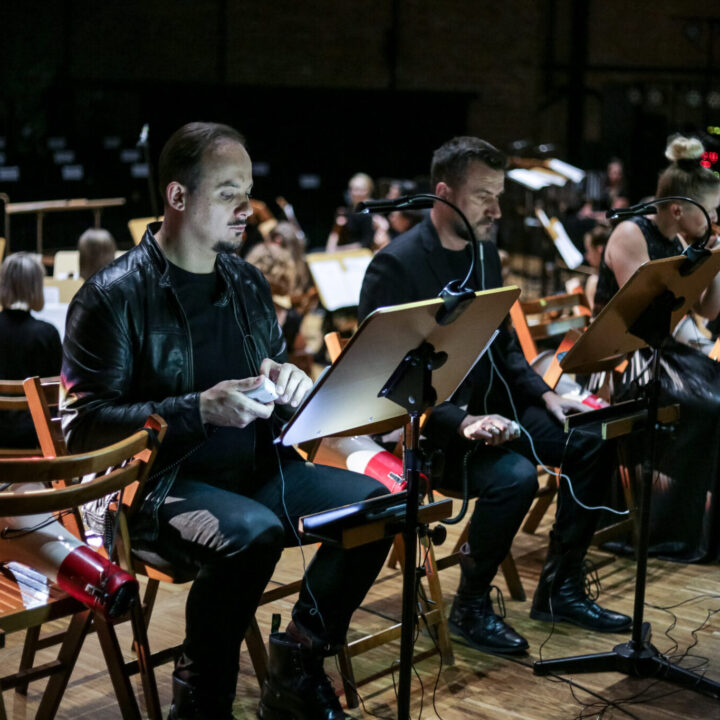