Main Auditorium The Centre for Culture in Lublin / 12 Peowiaków Street

Each of the artists, taking up the topic of searching for the sources of one’s identity, has put her personal experiences into the works and interpretations, which – as it happened – are experiences of women.

Teoniki Rożynek, taking the position of an observer and participant of the event interchangeably, enumerates the varieties of shouting – both loud, moving and silent, strongly inscribed in the experience of women. Shouting as discord, perpetually silenced, penalized, directed inward wreaks even greater havoc.

In her work, Nina Fukuoka attempts to interpret and internalize the phenomenon of the multicultural, multidimensional, undiscovered and mysterious identity with which we are born with. “Zansei” means “last years” in Japanese – in the piece they are read as an attempt to get out of the oppressive reality and live the “remaining years” in harmony with one’s own nature.

Marta Śniady reflects on the contemporary cult of the body – present in social media – however not in a social, but in a religious context. The word “ritual”, closely related to the original character of the flute, which has recently found its place in spas and plastic surgery clinics, is being returned to its basic meaning in the piece.

Aleksandra Kaca turns inward, looking for intimacy and closeness in simple sounds. From the documentary shots of skin with vitiligo or the body damaged by pregnancy, she derives references to similar textures in nature, which we perceive in a neutral, natural context as beautiful, harmonious, and valuable.

A versatile flutist with a broad range of repetoire including classical, contemporary and improvised music. Awarded with „Paszport Polityki” 2020. Graduate of flute solo studies at the Hochschule für Musik Detmold with Janos Balint (2011). Prizewinner of national and international music competitions in Poland and Germany (1999–2015). In the years 2006–2008 flutist at the European Union Youth Orchestra. Specializes in micro-projects in public spaces realized with local communities. In 2017, in cooperation with the pianist Marek Bracha, Ania Karpowicz initiated “WarszeMuzik” festival – a series of musical interventions in the courtyards of the surviving tenement houses of the Warsaw Ghetto. The festival is an attempt at re-membering the history of Warsaw with the help of chamber music composed by Jewish composers who used to live in Warsaw with the special role of Mieczysław Wajnberg. In 2013 she established the Hashtag Ensemble cooperative and leads its works: performing concerts of 20th- and 21st-century music, as well as engaging in improvisational and educational initiatives.  Hashtag Ensemble performs at new music festivals in Poland and across Europe: Tallin Afekt Festival, POLIN Music Festival, Sacrum Profanum (Cracow), Warsaw Autumn, Poznan Music Spring, Warsaw Musical Encounters, Musical Gardens, and many others. As a soloist, Ania Karpowicz has performed with outstanding ensembles and orchestras, she made over 40 world premieres of new pieces. As a chamber musician, she appears with Hashtag Ensemble, In:te:gro, Fl:Ar-Art and cooperates with the pianist Marek Bracha and the organist Michał Markuszewski.

Believes that new music is an important tool of social discourse, which means that she does not consider her field as an art of sound but seeks multi-layered meanings, references and links.

One of the chapters in Naomi Wolf’s “The Beauty Myth” begins with the words: “The women’s magazines preach the beauty myth like the gospel of a new religion. “And when you think about it, fashion, the cosmetics industry, and consumerism really have a lot in common with cult: 1. A world where models are the chosen ones and the rest of the women are the damned, 2. The concept of a paradise in the form of indefinite happiness, 3. Obeying a thousand laws which will allow you to achieve this paradise. 4. and the ceremony of death and rebirth by abandoning the old me and welcoming the new, better, prettier, happier. All of this – supervised by indoctrination techniques used in advertising. Every woman can redeem her sins if she eats what she should, dress as she should, sleep as much as she should. The rosary has been replaced by calorie calculators. The cult of fear is cultivated in the media. Fear of obesity, fear of aging, fear of ugliness. Men have an appetite and gain weight, and female appetites are the social embodiment of shame. In my piece, “4 rituals of women’s happiness”, I show this process, the way to salvation through daily rituals, after which each of us should reach our paradise. Beauty is a paradise or a state of grace, and ugliness is hell. If this is what we’ve always learned, I shouldn’t be surprised that the main comment I hear after the concert is not that I wrote a good piece of music, but that I look beautiful, or the blouse wonderfully exposes my neck.

In the process of creating my newest piece “Zansei”, I collaborated with Izumi Yoshida, who was involved in creation of the video part.

“Zansei” is a subjective collection of impressions, gestures, spaces and rituals that make up a journey through memories.  “Zansei” creates a fictional journey through an undiscovered dimension of the world. The hidden dimension is available to everyone who wants to plunge into space and try to understand the message behind the image and sound.“Zansei” is also a piece about facing the reality that nothing happens by chance, that we build our lives based on decisions. This is obviously a universal truth, but especially as a woman living in the present day, I feel that I live in a reality that differs from what is natural for me. I copy with an imposed reality that I found and that I can only modify, and not really change and model – built through my choices. This realization and awakening makes me want to live the “rest of my life” (japanese: “Zansei”) in harmony with my true nature.

In her work, she focuses primarily on color. Her interests are focused on blending different musical genres. She is a composer as well as a songwriter.

“Inner” is a result of many conversations and observations that show beauty as a different value depending on latitude, culture or time period. While writing the piece, it was important for me to return to Umberto Eco’s book and walk step by step through the changes that the canon of beauty has undergone over the centuries. “Inner” is a reflection on the fact that natural beauty and individuality are vanishing and giving place for artificiality, and forced, apparent perfection. Today, beauty, especially the feminine one, is synonymous with youth, impeccability and perfection, which is often difficult to even get close to. The image promoted by the media ceases to be a choice, becoming a pressure that we begin to succumb with time. Satisfying the artificially created need for smoothing wrinkles, covering up discolorations or removing scars and birthmarks that make our body a living map, constantly recording our unique history on it. It all resonated with me with particular force during my recent stay in Iceland, where I recorded shots for the video layer. Observing the vast spaces untouched by humans, I could admire dozens of various textures, from smooth soft moss, through rough lava fields to black, rocky beaches. At that time, I was wondering why the grooves in the rocks or the irregular relief of the terrain are delightful, and similar textures, also the result of natural processes taking place in the human body, make them unattractive. Iceland is a place where it is clearly visible that nature does not need our interference, and what delights its wildness, severity and diversity.

In her works, emphasis is placed on electronic sound design. She plays with the perception of the audience and uses “damaged” sounds as her tool.

It seems to me that scream, especially the suppressed one, is present in the lives of all people, regardless of gender or age. I can see more clearly, possibly through self-observation and the perspective my gender identity gives me, how women suppress screaming. For various reasons, but a large part of them are certainly the affectionate remarks given to us by our mothers, fathers, uncles and teachers. We don’t scream because someone might find us hysterical. We don’t scream because anger is bad for our looks. We never scream in order to not be too loud, not to be aggressive, not to be too weak. In my piece, repressed emotions are the starting point for creating an abstract narrative using flute-playing techniques. The flute, of course, from a certain perspective, may appear as an extension of the vocal apparatus, and certain sonic gestures may faithfully reproduce attempts to speak, despite internal resistance. The video was made thanks to the joint work of a wonderful team, consisting of a dancer and choreographer Krystyna Szydłowska, director Filip Bojarski, cinematographer Tomasz Wierzbicki and costume designer Nina Sakowska, as well as courtesy of Cukra Praga, where we shot the video clip. 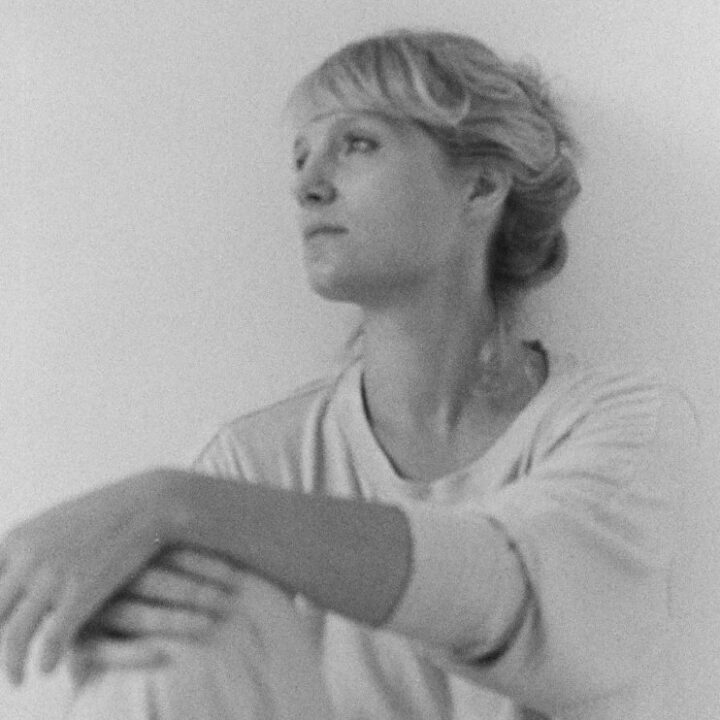 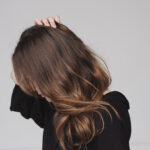 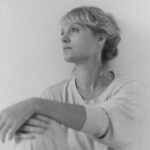 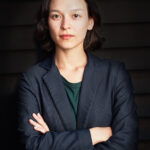