Main Auditorium The Centre for Culture in Lublin

Co-financed by the Minister of Culture and National Heritage from funds of the Culture Promotion Fund as part of the “Composer’s commissions” program, implemented by the Institute of Music and Dance.

DIABELSKIE SKRZYPCE [DEVIL’S FIDDLE] is a staged concert devoted to the figure of a local village musician. Those who claim that the greatest fiddlers of the past have simply played to dancing, are very much mistaken. Rather, they acted as a kind of guides to complexities of a specific rite or ceremony, they were mediators between the real and the spiritual world, very often exposing themselves to adverse impacts of demonic reality. It is not without reason that rural records very often feature stories about fiddlers having supernatural powers. Still alive today are stories about musicians raising their own incubi, owning some magical items, about their supernatural ability to damage strings of a fiddler playing in another band or forcing the violin to play alone.

This continually vivid transgressive power of traditional fiddle and traditional music making is consistently advocated by Radical Polish Ansambl who made their début at the CODES festival in 2018. This time, these passionate promoters of Radical Polish Culture have invited an outstanding Polish composer of electro-acoustic music, Cezary Duchnowski, an illustrious avant-garde cellist Mikołaj Pałosz, and a versatile singer Maniucha Bikont.

They chose some authentic mazurka melodies and a unique instrument, the devil’s fiddle of Lejaren Hiller. This American pioneer of computer music, while staying in Poland in the 1970s, came across a traditional instrument widely used rural ceremonies in the Kaszuby and Kurpie regions, and developed it to the level of an exquisite virtuoso instrument. The reconstruction of Lejaren Hiller’s devil’s fiddle in combination with inscrutable musical capabilities of Cezary Duchnowski will take the CODES’ audience back to the mythical times of fiddlers-witch doctors.

Freelance cellist, improviser and composer specializing in performance of contemporary and avant-garde music. Winner of many prizes at music competitions, including the Krzysztof Penderecki Competition for Contemporary Chamber Music in Cracow and the Witold Lutosławski International Cello Competition in Warsaw. He performed at numerous festivals, such as e.g. Warsaw Autumn, Musica Polonica Nova in Wrocław, 1st Paweł Szymański Festival.

Between 1998-2008, he was a member of Conjunto Ibérico cello ensemble seated in the Netherlands with which he toured Europe, Brazil, Mexico and the US. He is a permanent member of the Warsaw-based Cellonet Group. Also, he collaborates with Kwartludium ensemble. His solo album Cellovator was released in 2008. Together with a saxophonist Ray Dickaty and a drummer Paweł Szpura, they make the Osaka Vacuum Trio playing improvised music. In 2011, they released an album Emerging View. Holder of scholarships granted by the Ministry of Culture and National Heritage, the Capital City of Warsaw and as part of Młoda Polska program for young Polish artists.

Singer, musician, anthropologist, participant of field studies in Poland, Ukraine, Belarus and Russia. Member of musical and theatrical ensembles exploring folk music, rituals, improvisation and innovative singing techniques. A grantee of the Visegrad Fund in the chair of ethnomusicology in the National Music Academy of Ukraine in Kiev, in the class of Yevgen Yefremov (2010/2011).

Vocalist of such ensembles as: Dziczka, Z lasu, Niewte, Gęba. In Tęgie Chłopy folk music ensemble, she sings and plays the tuba. She collaborates with Prusinowski Kompania and other artists performing folk music in its pure, original form. She also works with jazz and avant-garde musicians, such as: Ksawery Wójciński, Assaf Talmudi, Shay Tsabari, Rafael Rogiński, Ilia Saytanov.

Composer and pianist, born on 25 February 1971 in Elbląg. He studied composition in the class of Leszek Wisłocki at the Academy of Music in Wrocław. He was among the initiators of the Computer Composition Studio established at the academy, where he currently gives lectures on production of computer music.  He writes works for chamber ensembles and symphonic orchestras, as well as music for films and theatrical performances. He is the author of multi-media projects, including an interactive opera with the libretto by Piotr Jasek entitled Ogród Marty [Martha’s Garden] (2006).

Duchnowski is a passionate advocate of improvised music. He collaborates with jazz musicians and other artists enthusiastic about performing live music. Together with Paweł Hendrich and Sławomir Kupczak, they founded the Phonos ek Mechanes group. In this group, he actively pursues a very specific kind of improvised electronic music – human-electronics, where computers are controlled by acoustic instruments. In 1997, together with Marcin Rupociński, he founded the Morphai group involved in artistic initiatives of an interdisciplinary nature.

He received grants from the Heinrich-Strobel-Stiftung des SWR e.V. in Freiburg, Foundation of the Friends of Warsaw Autumn, AUKSO Foundation of Music and the Ernst von Siemens Musikstiftung in Munich. Duchnowski is a winner of many awards. In 2012, he received an Award of the Polish Composers’ Union for outstanding achievements in electronic music and teaching activities.

Faith healer, musicologist and traveller. Descendant of the far-famed kinsfolk from Kurpie region and at the same time the first Polish student of Susan McClary and Harry Lehmann. His major occupation is researching oral records related to musical forms and conventions in the Western world and selected non-European traditions. He has published his texts in such journals and periodicals as “Glissando”, “MusikTexte”, “Music and Letters”, “Current Musicology” and “Popular Music”.

Self-taught fiddler, disciple of a great master Kazimierz Meta. Since 1992, he has been an active musician, making his creative search in the field of traditional music, folk art and handicraft. A composer and performer of music for film and theatre. He is actively involved in a direct master-disciple transmission process, both as a disciple of village masters and by sharing this knowledge with younger musicians during workshops.

Leader and co-originator of many art, culture animation and community undertakings, such as e.g.: Orkiestra Jarmarku Jagiellońskiego w Lublinie, Dom Tańca Poznań, Przodki, Maciej Filipczuk i goście weselni, Radical Polish Ansambl, Lautari, Tęgie Chłopy, Boygn Trio, Niewte, Regionalna Grupa Barw, Nomad Service. He received three grants from the Minister of Culture as part of the projects: “Mazurek Vulgaris”, “MetaMuzyka” and “Arche Vivum”. At the Crossroads Centre, he is in charge of the Workshops of Local Culture project and other events related to traditional music.

Radical Polish Ansambl attempts to bring together traditional and avant-garde music and it offers a real alternative to the stereotypical ideas regarding the relationship between folklore and classical music which are entangled in different “peasant-manias” and idealizations of the folk culture.

RPA performs canonical pieces of contemporary music and works composed specifically for them. This allows them to explore completely new formulas for group performance and forming relationships with the audience. As far as contemporary music is concerned, RPA offers the often sought-after “new performance” based on the primeval sense of rhythm, sound and tonal sensitivity, and oral tradition, which may seem paradoxical.

Formed in 2017, RPA has been led by Maciej Filipczuk and curated by Michał Mendyk. The members of the ensemble include six violinists: Emilia Bolibrzuch, Łucja Siedlik, Maria Stępień, Mateusz Kowalski, Marcin Lorenc, the leader Maciej Filipczuk and Piotr Gwadera, all of whom use traditional techniques borrowed directly from traditional folk masters. The band also performs with guests – instrumentalists and singers who also represent traditional performing techniques, rather than use musical notation. 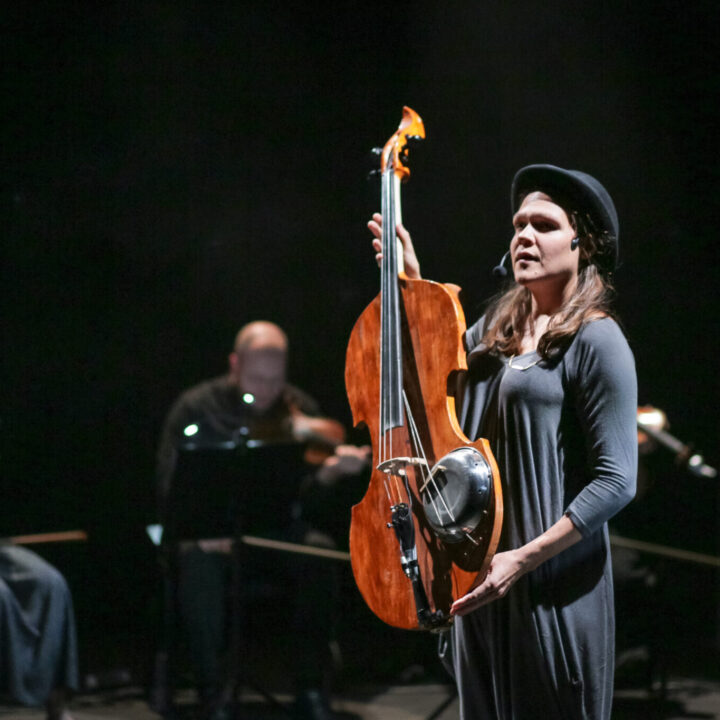